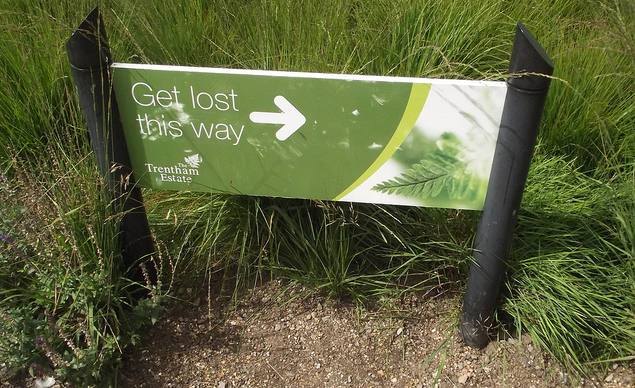 Image by Elliott Brown under Creative Commons 2.0
As a potential home buyer, I’m often frustrated trying to locate an open house. Arrows point in confusing directions, or the the trail peters out. I often end up at a different open house than I intended to go to. Interesting for me, but I always picture some agent sitting an open house wondering why so few folks are showing up.

Here are five secrets or tips you can use to make sure people find your open house.

Drive to the house as many ways as you can

When you’re planning an open house, take an extra hour or so and see how many different ways you can approach the house. Although there are probably one or two approaches that are used most often, you can bet that at least a couple of people will come a whole different way. You want to find all those ways and sign them accordingly.

In older neighborhoods where streets follow anything but a grid pattern this can be particularly challenging. One way to double check is to drive away from the house and see if you can find a new route.

You want a sign at every point someone can get confused

When you’re placing signs, you’ve got to pretend you’ve never been in the area before and put a sign with clear directions every single place someone can get confused.

This is where many agents make a mistake. The figure that if they mark the major popular intersections they’ve done their job. While this can work on streets that are straight, the ground level and most corners true, right angles, it won’t work where the terrain is hilly and/or the roads curvey.

Get a little creative about placing signs.

Place the signs where they can be seen

It would seem obvious that the open house signs have to be seen if they’re to guide folks to the property. I think what happens, however, is agents will often place the signs before the area’s parking fills up and as a result, at least some of the signs are missed as drivers try to found the house.

It can be tricky when roads are narrow or a bunch of competing agents have open houses in the same area. Ideally each of your signs will be on a sidewalk corner, except not every neighborhood has sidewalks.

When you’re physically placing an open house sign think about making it as visible as possible. Feather signs and helium balloons can help a sign be spotted in areas of touch visibility – anything, actually, that’s high enough to be seen over parked cars can work.

Listen carefully if someone says they had trouble finding you

If, during an open house, you hear someone complaining that they had trouble finding the home, quiz them about where it went wrong. It’s possible some kids actually moved your sign, although that’s not really  likely. Chances are the lost ones came a way you may not even have known about.

If you can’t leave to add a sign to sort folks out right away, at least make a note of it for future reference.

It’s often the case that you (or your office) doesn’t have enough signs to do a truly good job of helping folks find all the open houses on a given day. Fortunately, that’s easily remedied. You can get more signs. Sure, they cost. It’s a good investment if it brings more potential customers to your open houses.

You may have a local sign painter. If not, you can Google up as many types of open house signs as you can imagine.

What’s your secret for placing open house signs? Let’s talk about it in comments.